Tomorrow will be Day 8 in my ten-day wait for the results of my graduate school application.  Overall, I am doing well with the waiting.  Every once in a while (usually every day on my way home to check my email), I have a minor panic attack about the impending response to my request.  I want very much to be accepted.  My dream for a long time has been to move to England.  I don't know if I want to be there for the rest of my life or just a while.  All I know is that my heart has been set on it for years.  That being said, I'm terrified.

Moving away from home is a big deal.  My family, my friends, my comfort zones are all in SLC.  I love to travel and have no concerns when I am required to do so alone, but a year is quite a different tale.  Moving to London, I would be among fellow students who have left home to go to school as well, and hope that we would have that connection, if nothing else.  England does have some built-in comfort zones for me though.  Some of my favorite people live there and the prospect of being so close to them is really exciting for me.  All told, I am eager to hear the answer and, hopefully, start planning for my year abroad (and try not to be sad about the things I will miss out on by being gone). 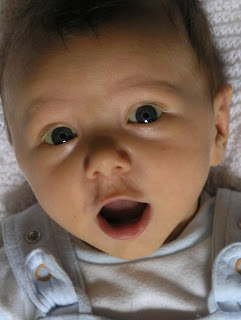 (One of the many people I love in England.  Who would not want to spend time with this cutie pie?)
Sore Bottoms
Somehow I have been keeping myself extremely busy since finishing school.  I thought I would have all kinds of spare time.  Time to blog, time to sleep, time to wander around the park and pontificate.  Those things have happened but in far smaller doses than I originally anticipated.  I read a lot for a while, but was slowed to only a couple of books last month.  A large chunk of that time was devoted to my application for school, I suppose, but still.
One of the biggest things I regret not having time for is exercise.  I really do enjoy being active and, as my job precludes me from moving more than about two feet a day, I need to move about after work to not go insane.  I started the P90X program last week but was unable to do it every day like I hoped to (good reasons though, a cute boy one night and a book club the other, both of which I am willing to make the sacrifice for any time :).  As a result, I was feeling particularly lazy this week.  So I biked to Lagoon yesterday.  For any of you unfamiliar with the reference, I'll just tell you that it is far.  Really far.  Twenty-five miles far.  My intent was to bike there and back.  I want to train for a century ride next May so I figured if I could do fifty right up front, then 100 would be easy peasy.  My legs were tired but I made it there and was ready to stretch and get psyched up for the ride home.  My heart skipped a beat, however, when at the end of my ride I saw my salvation.  The bright, shiny, Frontrunner train waiting to take me home.  That's when I realized I should probably not push it too hard for the first ride.  Clearly my body was ready to be done.  I did momentarily debate about whether I should pony up and finish my ride, but the internal dilemma was short and to the point.  Every part of me was tired.  I know I could have made it about ten miles more but that would have left me stranded at the Davis County border with no chance of a ride home for miles.  So I took the train.  Flash forward to this morning... my muscles are barely sore (certainly not as much as they are from one hour of the P90X stuff).  What really isn't feeling so awesome is the muscles right at the "bottom" of my tailbone.  :(  who knew that it could hurt so much?  Having done long rides before, I know its always uncomfortable for a bit after you stop riding and start walking (or even better, sitting), but wow, this time is definitely different.  Those few extra miles really do push the limit.
Brutal Honesty
The world of blogs, facebook, and the like allow us all to share our thoughts the second we think them.  We humans seem to have a pre-programmed desire to have our voices heard through the noise of the world.  Its almost therapeutic.  Hate that customer that just yelled at you?  Talk about it on facebook and your feelings will instantly be validated by your friends and peers.  She's a bitch and you're a hero, nothing else to it.  Think of something witty to say when you are all alone?  Post it on facebook and sit back as the comments roll in.  Our obvious desire to be connected to those we care about is catered to by thousands of websites and handheld devices.  But what about the times you want to complain about those you are connected to?  It may seem that we can say whatever we want, but social complexities still exist.  Your roommate avoided the dishes again?  Say something online.  Or maybe not.  You know he will read it, as will the mutual friends you have.  Then you are the jerk who aired your dirty laundry online and even worse, did it about something menial and insignificant.  It's as if someone told us, "If you have comments or judgements about strangers then by all means, post away.  But if you have grievances about those closest to you keep your mouth shut."  A strange kind of self-censorship takes place online as a result.  Similar to writing a journal, putting our thoughts somewhere other than our heads lets us analyze them from a different perspective (even better when we can hear others' responses to what we have to say).  But can we ever be brutally honest online?  I have to say no.  It is far too easy to hurt others while writing for our own catharsis.  Unless you are writing anonymously, be careful what you say online.
at Sunday, November 08, 2009