Music on My Mind

I recently discovered Mika and really dig his style (perhaps it's his obvious love of Freddie).  The first song that won me over was Billy Brown which I find to be such a sad but true tale.  After I heard that song, I searched for more of his stuff and came across Grace Kelly which sounded incredibly familiar so I'm sure I heard it before but didn't know who it was.

In anticipation of my move I have been attempting to put together an appropriate play list for the plane ride.  The problem is I want new stuff for a new life and new world but it's hard to know what is out there if I haven't heard it before (hint: I could use suggestions if you have them).  I do know that Breathe Me by Sia will be the first on that list.  It was featured on the series finale of Six Feet Under during the sequence where Claire leaves her family to find her way on her own in New York.  For reasons I can't seem to pin down this song really speaks to me right now.  I cry almost every time I hear it but it's a good cry; the kind of cry that is hopeful and excited with a hint of uncertain anxiety and a dash of healthy fear.  (side note: interestingly enough, the actress who plays Claire was 27 when that episode aired...oh and she was born Feb 20th).
at Tuesday, July 27, 2010

At this moment, I am sitting on my sister's couch eating chips & salsa and pondering more things than I can count.  I want to write about my thoughts on where I'll be this time next week. I want to tell you about Frank's birthday on Friday and the surprise we pulled off there.  I want to contemplate the possible meanings of and answers to Inception.  I want to give a shout out to my buddy E who turned 25 this week and is super awesome and fantabulous.  I want to skip writing and tear into season 5 of the Wire.  I want to go outside and enjoy the beautiful day.  I want to give you my thoughts as to what I want to get out of my new life in London.  I want to share my feelings about my Gram's memorial service this weekend.  I want to learn how to use my new camera so I can take awesome pics.  I want to learn how to take awesome pics.  I want to learn how to make salsa this tasty.  I want to let my friends know I will miss them intensely.  I want my sister's computer to not have the settings it does so I can figure out how to actually post pictures on here.  I want to put up a post about my trips to Alabama, Vegas, and Montana.  I want to work on my budget for school.  I want to figure out how to get the new-jeans-rubbing-off-on-my-new-purse stain to go away.  I want to stop eating these chips.  I want to keep eating these chips.  I want to invent a machine that allows me to get more time out of the day or let me live to be a hundred without getting older than, say, thirty.  I want to be settled in SOMEWHERE.  I want to find a great place to live that's bright and sunny and happy and fun and close to school and reasonably priced and lovely.  I want to drink tea in my new home.  I want to eat Onken!!!!  I want to take a nice long bath.  I want you to immediately get the pun in my post title.  I want my sister to be home so we can chat because I a) love her soooo much. b) think she's wonderful and sweet and kind and caring and funny and witty and lovely. c) am SOOOOO excited for her to be as excited as she is right now because she deserves it more than most people in the world. d) absolutely LOVE our chats; we have ourselves a good time. e) wish she didn't have to work.  Ever again.  I wish she could do what she loves and is passionate about.  I want to figure out how to get the blog gadget to work because it so isn't right now.  I want to organize my pictures.  I want to do absolutely nothing for at least one hour.  I want everyone to know how much it helped to get all these free flowing, chaotic thoughts out of my head.  Thanks!
at Monday, July 26, 2010 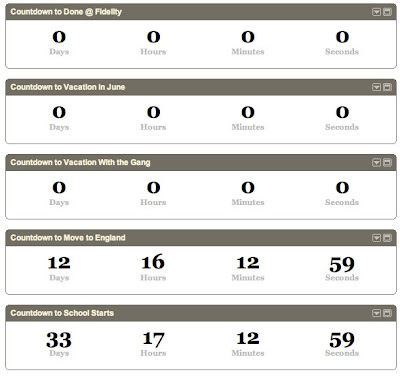 I learned about something interesting yesterday.  You all probably know about this but it was a revelation to me.  On iTunes, they have the iTunes University with free courses from all kinds universities.  I found a Yale course on the American novel since 1945, for example.  The course has a total of 51 classes but, of course, you can pick and choose any that look interesting.  As fellow lovers of learning, I felt compelled to share :)
at Wednesday, July 14, 2010

Oh, I Mentioned the Bisque

Ask me any question about my upcoming move and I can answer it quite thoroughly.  I've researched everything from housing, to free events, to details about my school, to the history of the city for hours on end over the last nine months.  I've all but memorized the London postal codes and neighborhoods.  I can tell you all kinds of interesting facts about the city.  I can show you a list of places to spend a free day.  Yet, when I answer these questions, I feel as if I am doing it academically; passing what I've learned along to others.  I don't feel like it's going to actually be my life.  I just can't fathom it.  Sure, I get excited about wandering the streets of the city, uncovering it's history and mystery but it's more a feeling of, "God, wouldn't it be soooo freakin' cool to live there?  To spend almost two years learning about the city you love?  To meet people from all over the world and learn about their histories, cultures, and traditions?  To have a coffee shop to call your own where you brood, or read, or blog, or study the day away?  To have local haunts where baristas know your drink of choice?  To have a pub where you know you can always get some good pudding when you need to be comforted?  To feel the cobblestones under your feet in the old parts of town?  Wouldn't that all be cool?'  The thing is, I have pondered those questions and felt that rush of excitement at the thought of it since I was 15.  After my first trip to the city I knew I had to spend more time there.  In my entire lifetime I could never know everything there is to know about the city.  I know that is the case with everything but in this situation it is something that truly makes me sad and exhilarated at the same time.

I love London and I am excited that I am moving there.  But I feel like I'm faking it when I talk about actually doing it.  I speak as if it is happening but I don't feel like it really is happening.  It's such a weird disconnect.  I talked about it with E yesterday and she said that it's as if life as I know it is ending on August 3rd and I have no clue as to my future life.  I really don't and it's crazy!  I know I'm going to school but I don't know what my house will look like, who my new friends will be, etc.  I packed my house and moved my stuff because it is a was one of the things on my list of many.  I answer everyone's questions because they are all curious and I'm happy to share what I've learned.  I'll continue to do so, and continue to work my way through the list of To Do's because I know I have to but as to the reason why, I still feel like I'm faking it.

The 4th of July

The 4th of July is one of my top two favorite holidays (tied with Thanksgiving, of course).  Tradition commands that I go to Sugarhouse Park to watch the show.  I know a secret spot which seems to be empty year after year no matter what time I arrive.  I believe the reason everyone overlooks it is because a tall streetlight stands between it and the field where the fireworks are launched.  The funny thing about fireworks, however, is that they shoot a tad bit higher than a streetlight.  I lie on my back, the smell of fresh-cut grass all around, and take in the show.  I love it.

Next year at this time, I will be living in the country we fought against to earn our right to this great holiday.  Needless to say, they don't celebrate it.  The funny thing is, I won't be able to celebrate the usual way this year either.  Don't get me wrong, it will probably be a lot of fun but it won't be normal.  I'll be in Vegas with the A-team (minus E).  We're headed down Saturday so we'll be there for the whole day of the 4th.  If Vegas were not the flithy* rat-trap that I know it is, I would envision the strip full of people having BBQs and chatting with each other over a cold beer and a sloppy joe (don't let the reality of the 104 degree weather or the fact that Vegas represents the opposite of "community" distract you from this fantasy).  Kids would throw frisbees or play football with their dads.  The boys (and us tom girls) would have a whole arsenal of fireworks to play with until the big show.  They'd throw smoke bombs in the street, scare their little sisters with poppers, or (my favorite daytime "firework") watch worms crawl their way across the sidewalk.  Music would fill the air (but not that patriotic stuff-that's one downside to the holiday-it would be happy, fun, exciting, make-you-want-to-dance-in-the-street music).  At one point, the firemen would open the hydrant and let us all run through the fountain to cool off.  Basically it would be Sugarhouse Park meets The Strip but with honking cabs instead of grass and trees and a dash of New York City legend in the mix just to spice it up.  In reality it will be nothing like this but I am still excited to see the city of lights lit up even more than usual and to do it with some of my favorite people makes it that much better.