Before I get sucked down the wormhole of internet research until the wee hours of the morning, I wanted to share my experience this evening.
The program director for International Relations at our campus puts together a lecture series each semester.  The focus is for us to meet people in the field, or related fields and get a sense of what they do and how they fit in the International Relations picture.  Tonight we met Kate Adie. She quickly became my new role model. 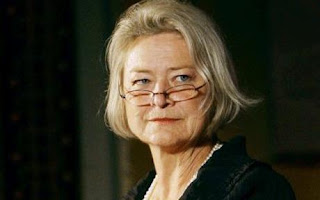 Her lecture focused on the changes in journalism during her 35-year career (partly technology but also how the public uses and processes media output).  She went through a chronological summary of the basic changes of technology: sending reports via the mail systems, train, radio, television, and the internet.  Each transformation was linked to a story from her own experience.  She is one of the most delightfully witty and entertaining professionals I have ever encountered.  Through her stories, she highlighted the difference between current times when video is instantly and digitally distributed after an event, and 20 years ago when journalists had to get up and go to a story.  After the 1988 earthquake in Armenia she and her crew attempted to get into the country to send pictures back.  At that time direct access was incredibly limited for western reporters so they tried to go through Turkey.  After crossing the border, they realized they were, in fact, in Georgia not Armenia and had to cross yet another border to get to the site.  Despite this delay they were the first team to take pictures of the event though it had occurred FIVE days before.

Her lecture was filled with hilarious observations, delivered with the finesse of a natural comedian, and rounded out with moments of deep sincerity and keen insight.  I wish I could transcribe the entire lecture for you replete with her animation and charm but I will have to limit it to quotes I feverishly wrote down as she spoke.

"There will always be a need for verifiable journalism" - She explained that nowadays it is harder to tell what is bullshit.  You read things online and they look professional and trustworthy.  These same people used to send "news" to the BBC but it was easier to spot because "the letters were written in green ink mailed in an envelope that had been reused about forty-two times."  Now though it takes the effort of the reader to learn if the source is verifiable.

"You have to quiet the bangle of voices so you can find the facts" - She gave us an example: Picture yourselves sitting in class and news arrives that the most disliked character in school has just been found running around the school grounds naked.  The room is immediately full of chatter about who saw what and the details of the scene.  But how can you know if what you are hearing is real?  The only way is to say, "'Ang on a minute!" and ask who actually knows this is true?  One person speaks up to say they saw it, they were there.  Then one more verifies they were there and their details match the first's.  Now that you have two sources you are on your way to getting something closer to the real picture.  This was her metaphor for using the internet for news.  There are just too many sources voicing opinions and "facts" so you need to shut them all up and start to build a case.

"We leave it up to those of you with educated, discriminating minds to find the fair, accurate, true, dispassionate, verifiable info" - With regard to what sources you choose to read.

"The problem is those of you here with educated and discriminating minds are not terribly fascinated with things that go on outside your circle of interest." - The second half of her lecture focused on both where we get our news and what stories we decide to read.

"If there's a ruddy great Martian spaceship hanging over Denver, we'd quite like to know!  We're quite sort of open to a big news story."

"'All the news you can use' is quite limited.  You don't wake up and think, 'I wonder what's going on in shnmumsh'" - She feels very strongly that we need to expose ourselves to news from EVERYwhere, not just tailor our sources and stories to the places we think matter because....

"The unexpected, the out of the blue, in the faraway place of which you know little may still end up changing your life."

After her lecture, our professor opened the floor up to questions.

Question: (in essence, not sure exactly the words) Do you think that the trend for sensationalizing news is creating a space where people don't care what is real as long as it is entertaining?

Kate: She whipped out a perfect quote from back in the 17th century from someone saying that the news consisted of only those things that caught people's attention just like today: sex, violence, intrigue, etc. (I will try to find this and post it for you. It's really quite interesting).  Then she gave an example, "If I put two bits of news in front of you, one is the minutes from a congressional meeting where they are discussing the details of a trade bill, and the other is...Lady Gaga doing....something with a snake, which one are you going to grab?"

She does agree that "television worldwide is heading toward the entertainment sector at a hell-bent speed" and that we will have to learn to be even more discerning when it comes to wading through the noise.

Regarding FOX news.  She is oddly not a big fan
"They are villains! They look at the people and despise them. They treat the audience with contempt. 'What can we sell to these fools and what will appeal to the lowest common denominator?"
She also said she has worked with FOX reporters and they "are not good journalists.  They have an agenda"
Her example of the lower common denominator point was that during a recent volcano (not the iceland one but something prior) instead of discussing the impacts on the people of the nation, the environment, even the economy, "they had a guy with a pointer explaining how a volcano works!"

She thinks the 24-hour news trend will likely be short-lived.  "It's like wallpaper.  When you walk into a room you don't immediately get interested in the wallpaper, you just notice when it's gone.  This is the same with 24-hour news."  "It seems like EVERYONE is watching CNN but on an average day in the whole of the UK, the ratings are too low to measure"

Morning news is merely "people who got out of bed at 4 in the morning, are given a microphone and asked stupid questions"

Another student from Iceland said that she read a lot in the papers during the volcano that was misleading about her country and was concerned that if they can mess up those small things, how do we know that the big things are accurate?

Kate's response was that if we see things in the paper that are wrong, we should be calling and writing and making a fuss.  The only way to hold journalism accountable is to force them to correct their mistakes.  This led to the topic of Do People Really Care Enough to Know What's True?  "Journalists could drink themselves into oblivion over that question" but ultimately there is a human desire to know the reality of things.  We want to know what the real truth is and because of that longing we will always need to have reliable new sources.

Her last statements became a call to action. "You DON'T COMPLAIN ENOUGH!" she said, beating her hands on the table.  "A passive audience is a dangerous audience.  They resemble sheep.  What happens to most sheep??  You are not just consumers!  Be regulators! Complain! Have a go at people! You have to be active! Don't sit and whinge!  Get up and do it!"

I am incredibly grateful that we were able to meet this amazing woman.  As soon as the semester is over I will be buying her books and listening to her podcasts!
at Saturday, September 18, 2010