Yesterday I had the chance to attend a culinary seminar by Carlos Ribeiro, a chef from Sao, Paulo, Brazil. He owns a restaurant and cooking school and is also a professor at four Brazilian institutions. While he cooked us a delicious lunch, he explained Brazilian culinary traditions and the global influences in the food. Brazilian food, he told us, is influenced by Italian, French, Spanish, Japanese, Korean, and African cuisines, among others. Because the country is so large, different areas experience stronger cultural influences based on the demographics of the inhabitants. The south, for example, has towns whose people are mostly German, speak mainly German, and as a result have strong German culinary trends.

Carlos invited us up to watch as he made his dish. He explained that normally they would use clay pots instead of steel. Other than that, he was able to find all the ingredients for his dish at the Shepherd’s Bush Market which he was very surprised but genuinely ecstatic and pleased about. The dish was incredibly colourful – tomatoes, coriander, peppers, garlic, lime, cinnamon. This variety, he told us, is something Brazilians expect in their food. According to Carlos, they would not react favourably to a dish that is “too white or yellow.” They love colour in their dishes and this meal was a prime example.

Throughout the demonstration Carlos gave us tips on how to cook our own food in a more Brazilian fashion. Perhaps we should try frying a bit of onion and garlic in the rice pan before adding the water and rice to boil. This method allows the rice to absorb the flavours and adds to the depth of any dish it is coupled with. He explained that at home, a mother cooking a meal will cook the main dish first and then use some sauce from that dish in the side-dish to tie them together; which he also did with our meal. A new Brazilian trend around wine is also emerging. It is becoming popular to drink dinner wines made from two or more varieties of grapes. Carlos made sure to tell us that the three-grape wine, Cabernet Sauvignon Carmenere from Chile, is his favourite of this style and gave us each a small taste to enjoy with our lunch.

Carlos is currently writing his PhD thesis on Japanese food in Brazil. He travelled to twenty-six regions in Japan and thirty-four regions in Brazil to interview Japanese people about their cooking. His main question for them was, “What did you do when you moved to Brazil and could not get your traditional ingredients.” From this he is studying the effects of migration on cuisine and compiling a cookbook of Japanese recipes using Brazilian ingredients.

In his words Brazil has experienced years and years of culinary infusions and this “infusion has become confusion.” He does not look on this as a threat to Brazilian tradition however. He embraces the global influences and is interested in finding ways of blending the Brazilian tradition with new tastes and textures. Carlos’ passion and enthusiasm for understanding his country’s tastes made the lecture incredibly interesting-and the wonderful meal made the event even better. As I listened to the seminar I realized that in my Latin American studies so far I have not even considered the impact of colonization, independence, immigration and globalization on the foods of nations. Hearing Carlos highlight these trends and embrace the many cultures of Brazil was truly enlightening. 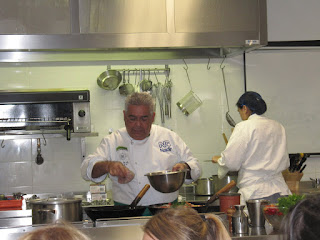 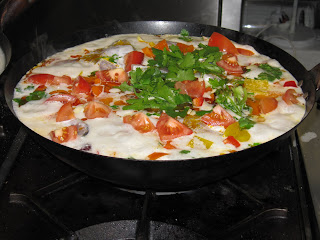 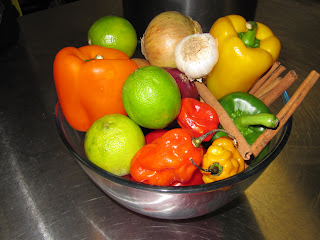 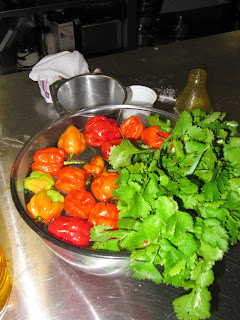