Last week, Alex and I had the great pleasure of attending Kristen and Jeremy's wedding in Sun Valley, Idaho.  It was spectacular.  The view, the trees, the breeze, the people, the hot tub, everything.  I have been putting off writing this post because there were so many cool things I didn't know where to start.  So rather than telling you one big story I figured I put up some pics with captions and save myself a few thousand words.  Congrats K & J!!!!  I'm so glad I got to be there.  It was amazing!!! 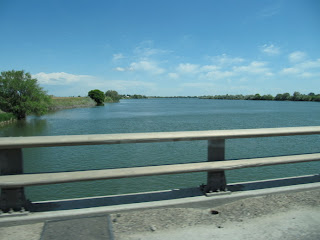 A big river we passed over on the ride up.  I found myself quite taken with the scenery on this trip.  I know it is Idaho *she says in a whisper under her breath lest she be judged for finding beauty in Utah's ever-mocked neighbor* but it was gorgeous!!!  The long spring and excess of rain had some magical effect here because the hills were a brilliant green speckled with lovely wildflowers.  This picture shows none of that, of course, but it goes a long way in explaining why you will be seeing so many road-side pictures. 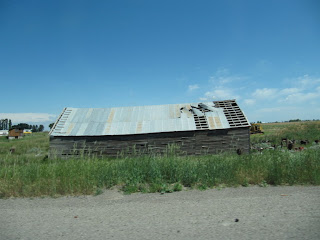 My upcoming move has made me prematurely nostalgic and homesick.  Everywhere I turn I see a vista that blows my mind away.  Having had the desire to leave Utah since middle school, I find it interesting that I am getting so weepy over it.  We live in a beautiful place, y'all!  The mountains, the trees, the dirt and sand and desert critters...they really are amazing.  I don't think I will be seeing many rundown sheds or barns in the English countryside that have that unique western look.  It's something we've made our own out here.  When I was a kid we had a cabin up outside of Heber.  I loooooved going there.  On the drive, we passed a HUGE barn that was perpetually on the verge of collapse.  Every year we thought the winter would claim it but it stood strong spring after spring.  Seeing this brought me back to those days.  I remembered being excited about catching frogs, going for a ride on the ATV, breaking into the drug house across the meadow....I guess I should probably stop there.

Another nostalgic scene for me.  I spent many a summer in, and made many a drive to, Missoula, Montana as a kid.  These sprinklers bring me back.  My family used much smaller irrigation systems but I always wanted them to have these.  A bit overkill for the size of their places, maybe, but they have wheels!!! No hauling pipes around with these babies.  Give 'em a shove and you're off.  Now, don't get me wrong.  I was the "spoiled city kid" who never really had to do much in the way of farm work, but I wanted to SOOO much.  As the baby, I was relegated to the house (being inside when I could be outside is certainly an inner level of hell for me) and forced to watch while the big kids did all the work.  Granted, I would have crumpled under the weight and whined about being tired, but inside I would have been LOVING it. 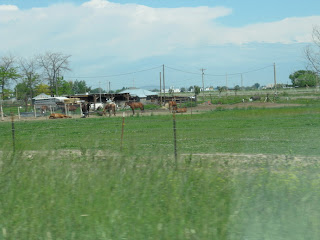 I love horses.  In Missoula, my grandparents' neighbors had several horses and I longed to ride them every day.  I love the smell of them, especially right on that soft part of their face.  I love watching their lips wrap around an oddly shaped carrot.  And I love spending the day in the saddle riding through the country. 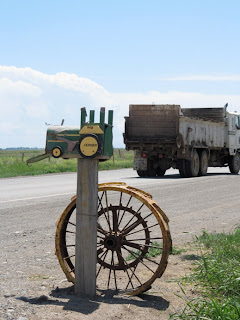 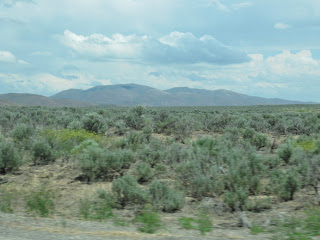 Sagebrush.  Apparently it's the peat of the west; mysterious to foreigners and boring to locals.  When our German relatives visited many years ago, the one thing they asked to see was sagebrush.  Luckily we were able to give it to them in spades at no expense to us.  We made them show us castles when we visited them which they were as equally unexcited about as we were about this weed. 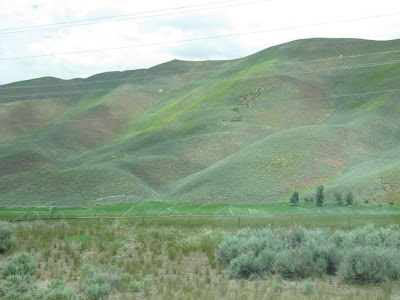 See what I mean about the green!!! It was amazing!!! 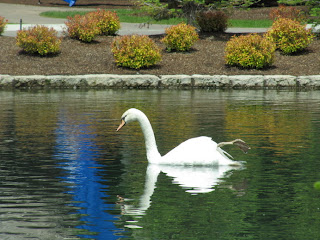 A sad, broken (we assumed) swan outside the front entrance of the Sun Valley Lodge 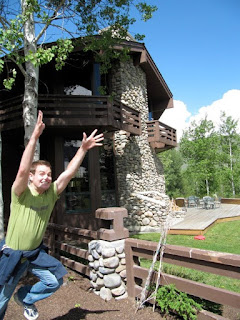 The Symphony Cottage.  Our home for two days.  What's that, you ask?  It doesn't look like a cottage?  Well, I'm sure it's smaller inside than it looks... 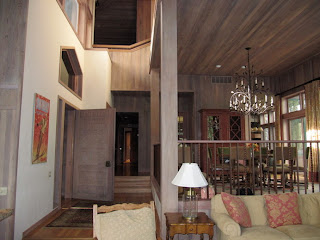 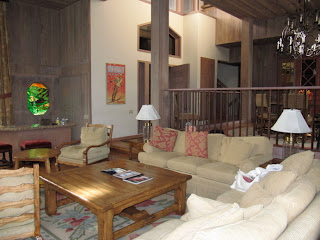 Apparently not. This place was gigantic.  Seven rooms, nine beds, endless bottles of wine.  A good time, to be sure. 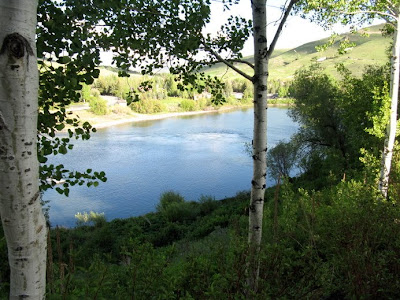 Oh yeah!  Let's not forget the view from the back balcony. 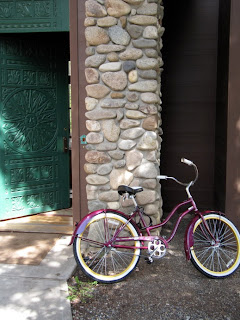 I thought this was the cutest cruiser ever.  Then I found out Kristen had RENTED it! 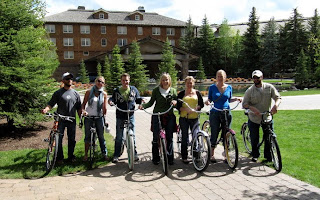 So we all got one. 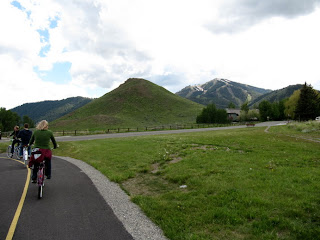 And went for a ride "into town."  You gotta love Idaho/Utah/Montana.  "Town" is any place with a few more houses, stores, or restaurants than where you are at.  Ketchum was tiny and had a Park City-ish feel.  Quite lovely though. 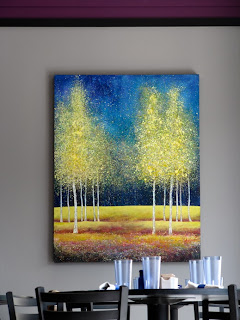 Kristen, MJ, Alex, and I wandered the town and came across the Moose Girls Bar.  We had some pomegranate lemondrops and some tasty appetizers.  Delicious! 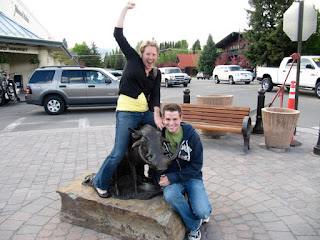 Alex and MJ givin' some love to the boar. 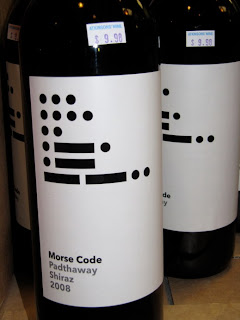 I took this picture with the sole purpose of decoding the Morse.  I'll post the update when I have time to do so. :)

Day 2: The room-me-ates go for a bike ride.  Twas a lovely jaunt down long the riverfront, don't ya know. 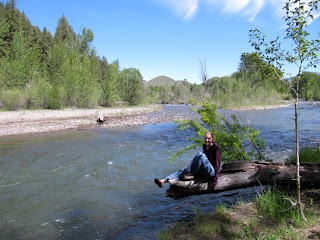 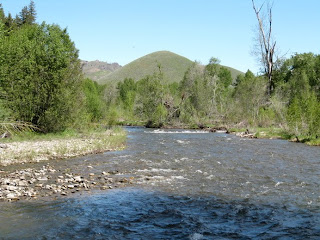 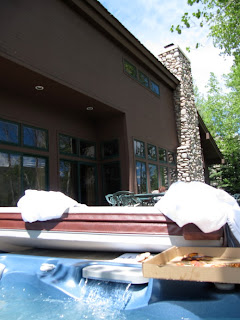 Hot tub.  Wine.  Cold leftover pizza from dinner the night before.  A bag of candy.  Delectable chocolate chip coconut cookies.  Crossword puzzle.  View of the lake.  Good company.  If you know a better way to celebrate a successful 10 mile bike ride, you're lying. 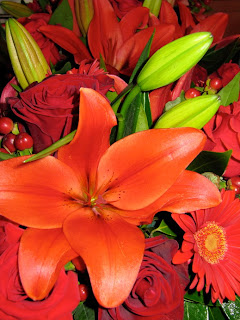 The matter at hand:  We didn't actually come here just to veg and bike and hot tub all weekend.  It was, in fact for a wedding.  A marriage of two of the sweetest, kindest, raddest people around.  I met Kristen through Alex.  He spoke of her often and highly and when I first met her I thought she seemed cool enough.  I didn't really get to spend time with her until Alex and I moved in together but once that happened I adopted her as my own.  She is awesome.  No other way to say it.  We've had all day lady-dates at Brewvies, we've bitched over men (my men, not hers so much cause he's pretty great), and we've hula hooped like mad ladies.  Alex is right.  Kristen is a diamond in the haystack (I wanted to mix two better metaphors there but nothing seemed to convey my meaning as clearly).  She's one of those people that doesn't really stand out from the crowd in a quick scan.  But once you spend any amount of time with her you notice that she's just a step above the rest; the kind of friend you go searching for but never find unless by accident.   She'd go out of her way to do ANYTHING if she knew it would really help you or make you happy.  She is one of the most honest people I know.  She is generous, and attentive, and well spoken, and intelligent, and, well let's be frank, there's a reason she is my chosen lesbian lover if we ever switch teams.  I heart her :) 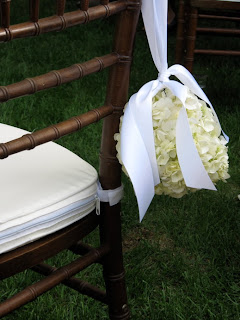 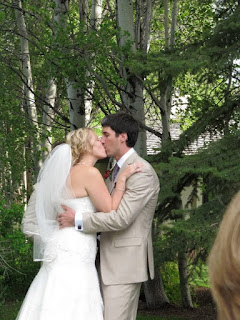 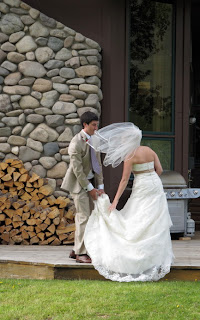 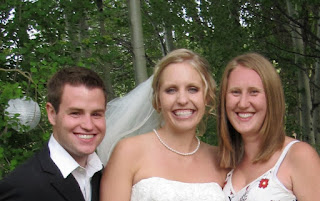 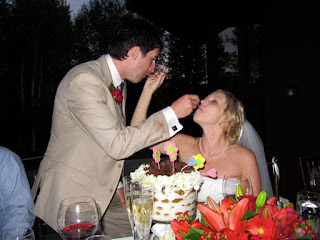 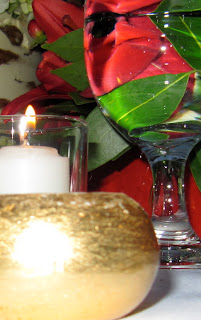 Drunken Noelle taking pictures of table decorations.  They were pretty though!  Don't look at me like that. 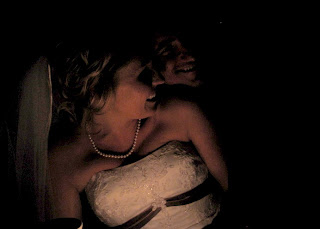 Drunken nighttime candlelight fun with Lindsey.  I liked how this one came out though.
So, as you can see, a successful trip all around.  Good company, good laughs, good wine, awesome wedding.  :)
at Wednesday, June 30, 2010