In the first installment of random image search based story-telling, I shall tell you about this photo: 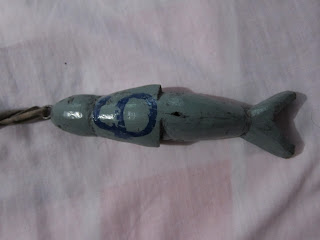 This may not seem like a photo worth a lot of words but it certainly is!  A great start for our trip down memory lane.

Attached to this as-yet-unidentified grey blob of animal/vegetable/mineral is the key that unlocked the door to our room on nights 19 and 21 of the Annapurna trek (April 30 and May 2).  More specifically to Room 6 of the Namaste Bamboo Guest House and Restaurant in Bamboo.  We scored this quad-room at a bargain the first night after I used my feminine charms to barter with the hotel owner.  Okay okay, it was probably because she pitied my feeble negotiation attempts and more likely the result of her agreeing to my terms quickly so as to get me and my offensive hiking odor out of her kitchen as quickly as possible.  When we returned from Annapurna Base Camp two nights later she handed us the key as if we come every week.  She was a lovely lady indeed and we were all terrified of her.

Highlights of our two nights here included cat showers, hot chocolate, and some serious bridge playing.  Let's take it one at a time:


Markus constantly informed us that German is the best language in the world as it has a phrase for everything.  I was not disappointed in his explanation of cat showers - a shower lasting as long as a cat would stay in.  A very useful phrase I feel.  You will sadly miss the hilarity of him acting it out - replete with hissing - but know that it made me laugh so hard I snorted. The shower in Bamboo was sooooooooo cold I thought my hands would fall off.  It was, however, also sooooooooo necessary as it had been two sweaty days of hiking (the second consisting mainly of the "long, steep, stone staircase"we had dreaded for ages).  That shower took forever because I could only put about ten square inches of my body in it at a time and had to wait for my hands to thaw out at several points.  Don't get me wrong, it is refreshing in its way and awakened me to the depths of my being.  Most of the time I felt like this though. At least I could look forward to a nice, big cup of steaming hot cocoa to warm me up inside.  That was until, after a couple of soothing sips, Markus asked if the floaties in our drink were unmixed powder or just bugs.  Closer inspection revealed the disappointing truth.  The thing is, folks, after traveling that long you just pick them out and keep going.  We competed for the winning number and finished our cups.  I still think I would have been in the running if I had not taken a couple of greedy gulps prior to our discovery.
The results were as follows:
Markus - 5
Chris - 3
Me - 2
Evan - drank his before our discovery so we will never know 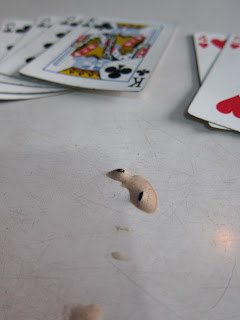 From  Day 1 of the trek we had a habit of playing cards almost every night.  Our typical games were Shithead and 31.  That was until Maggie threw Bridge into the mix.  We turned into ravenous beasts for it, playing for hours and hours at a time.  The first day we arrived in Bamboo about midday which was quite early for us but were forced to stop because it started pelting down rain.  While trying to decide if it was a lunch break or our final destination, we played Bridge.  We also played for about three hours after we decided to stay.  Everything was really just an excuse to play more Bridge.  Having given up on the complicated scoring system, we implemented something based on checks, check pluses, and Xs.  Even that got too tedious so it eventually become something smiley face oriented.  In a fierce game of Us vs. Them the Thems took it pretty soundly.  The Us-es did have a couple of pretty stellar hands though!

These hours and hours of Bridge took place in one of the nicer dining halls of our trip (filled with hideous fake flower arrangements) while we ate some fantastic dal bhat - and our fair share of Snickers. 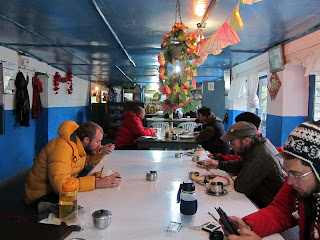 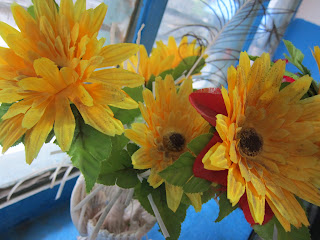 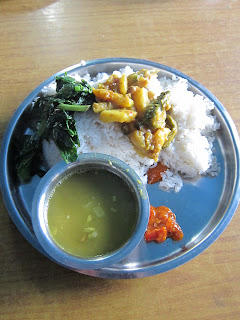 Evan and I also spent a good chunk of time watching the goats play fight outside in the morning.  Pretty fun to see!  All in all, Bamboo was one of my favorite places on the trek and definitely the most fun on the Base Camp trail. 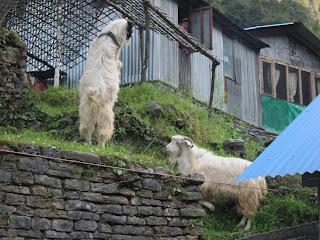 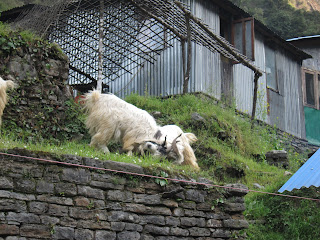