The last three days have been quite the whirlwind.  While waiting for my Fedex package of biking goods to arrive on Thursday (yes it's here!!!), I ticked off several big To Do's from the list: organizing my photos, writing a few long-overdue emails, reading a pretty awesomely long letter from my sister's pretty awesome girlfriend, and kicking my own ass yoga-style for an hour were among the top successes.


Still sweating from the later, I quickly changed and went to meet the girls for a movie and dinner.  We saw Love and Other Drugs which is exactly everything you predict it would be (only I smuggled in some delicious cider which made it much more bearable), then we had some burritos for dinner.  The time finally came for us to break up our little group when Lindsey and Yafit had to say their goodbyes to Aby.  Not my favorite moment of the night.
I stayed at Lindsey's so I could be there to help haul her things out first thing in the morning.  We were in bed by 11 but didn't sleep until well into the 2 o'clock hour due to our ability to cram more words into one day than should be humanly possible.  Topics included: stupid ways we got hurt as kids, awesome ways we got hurt as kids, retirement plans and the joys of our former professions in finance, cats, packing strategies, and life the universe and everything, among others.

First thing in the AM we loaded ourselves up with bags and suitcases and made our way to Cricklewood where we cooked up some tasty quesadillas for lunch and puttered around until Yafit arrived.  In the evening we headed out to central London with no real destination in mind.  We found ourselves at Piccadilly Circus and, through the throngs of not-all-that-dressed people, we slowly moved through Leicester Square, skirted Covent Garden, and wandered down the Strand until we found a way to the river (cider-filled water bottles in hand of course). 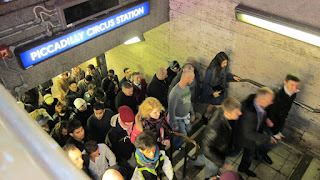 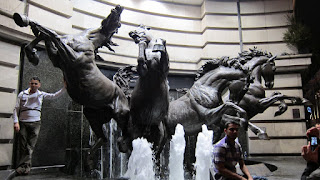 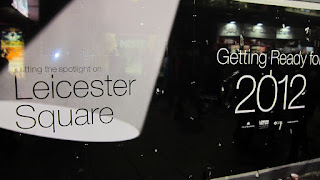 So. Many. People.  We expected crowds but this was a little bit ridiculous.  By 1130 we were kind of ready for the fireworks to start but we pulled up a piece of road and listened to some tunes while we waited.  When the final minute countdown began there truly was a palpable sense of excitement in the air.  I had never been in one of the big New Year's places (unless you count Florence which is a whole different tale) so it was really fun to actually shout the numbers along with so many other people.  The fireworks blasted off of the Eye and two barges in the river.  Quite the show!

As with all major events, leaving is the buzz-kill.  I would attempt to give you a description involving examples of SLC events but there is nothing remotely close to it.  So just imagine millions of people by the Thames being herded into two or three side streets as exits.  Or maybe just look at the pictures below. 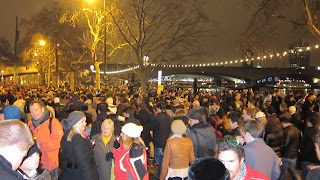 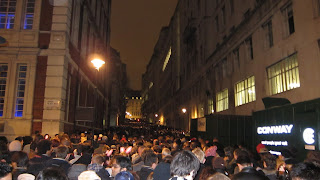 It took us two trains, one bus, some walking, and a taxi to get home but we made it and were in bed around 230.  Our alarms went off at 630 to get us out of bed and off to the airport.  The three of us hauled suitcases to Baker Street where we said goodbye to Yafit on the train.  Lindsey and I kept going on to Heathrow for her to catch her flight.  Everyone got away easily and made it home safely!

Exhausted from two days of little sleep I hit the sack at home and finally awoke at the uncharacteristically late hour of 2pm.  I bummed around the house and finally made some breakfast before settling in to watch Amelie (quite possibly my favorite lazy day movie ever).  In the evening I called my parents to hear about their raucous New Year's Eve at home and made some soup for dinner.  All in all an incredibly lazy day but, as evidenced by the pictures below, I was not the only one making good use of the holiday.

What about you guys?  What did you do to ring in the New Year?